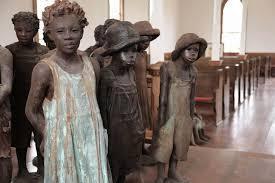 At Whitney, the visitor finds not only slave cabins and exhibits but also a series of walls engraved with the names of the 107,000 slaves who lived in Louisiana before 1820. The Times says the memorial “lists the names non-alphabetically to mirror the confusion and chaos that defined a slave’s life.”

The museum is the brainchild of a Louisiana-born white lawyer, John Cummings, 77, who plowed $8 million of his own money unto the project. Was white guilt what motivated him? “If ‘guilt’ is the best word to use, then yes, I feel guilt,” he told The Times. “I mean, you start understanding that the wealth of this part of the world — wealth that has benefited me — was created by some half a million black people who just passed us by. How is it that we don’t acknowledge this?”

Probably the most troubling sight at Whitney will be a pending memorial to the victims of a 1811 slave revolt there. The story goes that at least 125 enslaved people walked off their plantations and marched down the river road toward New Orleans – until white militias stepped in. About 95 protesters were killed – including dozens who were decapitated as a warning to other slaves. Their heads were placed on spikes along the road and in New Orleans’ famous Jackson Square.

To memorialize that gruesome action, Cummings hired a sculptor to make 60 ceramic heads, which will be mounted on steel pikes at Whitney. “It is disturbing,” Cummings told The Times. “But you know what else? It happened. It happened right here on this road.”

The news of this ground-breaking museum caught my attention because I’m currently researching a group of fugitive slaves who resettled in my hometown in northeastern Pennsylvania. Next time I’m in New Orleans, I’ll take the 35-mile side trip to the Whitney to absorb its story, learn what I can, and pay my respects.

Consider doing the same. At the least, check out the article in The Times. Here’s a link: http://www.nytimes.com/2015/03/01/magazine/building-the-first-slave-museum-in-america.html?_r=0#