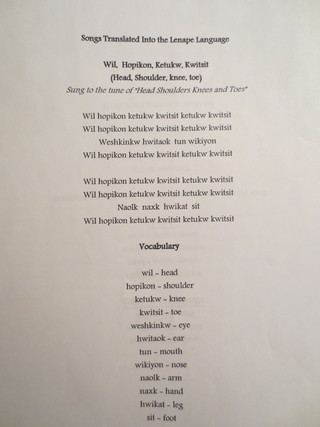 A sample of transliterations from the Swarthmore College linguistics project.
The game efforts to keep the Lenape (Delaware Indian) language alive has been on my checklist of good blog topics from day one. Other ideas kept crowding it out, however, so it stayed in later-soon status. But it’s time now, past time, to jump in.

What brought the issue back to mind is a language controversy currently embroiling the Navajo people in Arizona. Perhaps you read about it in this week’s New York Times. The Navajo Nation just installed new leaders – except for elected president Chris Deschene. It seems that fluency in the cherished Navajo (Dine) language is a requirement of leadership, and a court challenge over Deschene’s lack of proficiency led to his being disqualified from office. The future of the tribe’s leadership, and of the fluency requirement, sadly remains up in the air.

Back in Pennsylvania, the descendants of the region’s indigenous Lenape people have reasserted their culture and their very presence over the last few decades. Last summer I wrote here about how representatives of the Lenape Nation of Pennsylvania took a river journey down the Delaware River bearing a Treaty of Renewed Friendship they signed with environmental groups, churches, historical societies, and other supporters. The Lenape group has a web presence and has helped to inform public displays and scholarship at the University of Pennsylvania, Swarthmore College and elsewhere.

One of the most inspiring, and probably toughest, aspects of the Lenape’s modern-day revival has been salvaging their endangered language. This language holds a special place in our history, being widely enough understood in colonial days that it was often the choice of diplomatic interpreters. It certainly figures largely in the white-Indian council proceedings in my historical novel Visions of Teaoga.

But today, according to Shelley DePaul, chief of the Lenape Nation of Pennsylvania, there are only three proficient Lenape speakers left in her community. Yes, three.

DePaul is one of them--but she is working hard to turn that around. Since 2009 she has taught her language in a unique program in Swarthmore College’s linguistics department. She teaches a combination of Lenape culture and language to students who generally are not native themselves.

According to a Swarthmore College article about the project, DePaul and her students have transcribed surviving passages of the language. They’ve set grammar standards. They’ve developed dictionaries, primers and phonetic renditions, much of it available online. She said they've even translated cultural ceremonies back into Lenape so her people can perform them as originally intended.

“Lenape is not taught at any other institution of higher learning in the world,” linguistics chair K. David Harrison was quoted as saying. “The fact that it's being taught here, in the traditional Lenape homeland [the Delaware River watershed], makes a small contribution toward addressing past injustices suffered by Native Americans.”

DePaul’s invaluable work reminds me of an article I wrote in the 1970s when I was a VISTA staffer for an American Indian newspaper in North Dakota. There was a desperate effort to transcribe the spoken language of the Arikara Indians by tapping the tongue and knowledge of one of its last living speakers. The effort bore fruit. The Arikara language remains alive, though on life support, still spoken by a few reservation elders.

An irony of DePaul’s project is that non-Lenape Swarthmore students have become some of the most fluent Lenape speakers alive. But perhaps out of their goodwill effort, a measure of historical justice will emerge.