Legend of The Bloody Rock 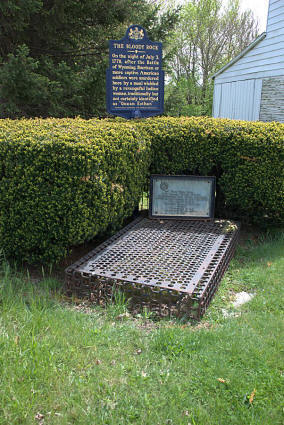 The Bloody Rock lies beneath a protective grate on the west bank of the Susquehanna River.

I’m accustomed to getting blank looks when I ask. It’s such a shame, and one more example of how we’ve forgotten so much of our amazing local history. As the anniversary of that gory event nears, allow me to explain what’s still there—on the roadside in northern Pennsylvania--for you to see.

The incident occurred 237 years ago, immediately after a Revolutionary War fight on the banks of the Susquehanna River near present-day Wilkes-Barre, Pa. Because that area is known as the Wyoming Valley, the fight is officially called the Battle of Wyoming. The Patriot side, however, termed it the Wyoming Valley Massacre because of how their militia was overrun and slaughtered by a joint British-Indian force that afternoon of July 3, 1778.

I recounted the gruesome event during an author talk last week at the Rydal Park senior residence outside Philadelphia. Accounts of the battlefield mayhem had already sobered my 45 listeners, and they really began cringing when I started describing the Bloody Rock. On the evening of the battle, I told them, a dozen or so of the Patriot militiamen who’d fled the slaughter were hunted down, tied up, and led to a stone slab near the river. As night fell, the men were placed around the rock, prone on the ground, with their heads on the rock. And there they were summarily killed.

It’s said this was the work of the Indian warriors. A white witness hiding nearby swore that the executioner was a native woman. He said he saw her lift a war club and, dancing and screaming, methodically bash the skulls of the captives one by one. And he said she was Indian royalty: the matriarch already known to the whites as Queen Esther.

I’ve gotten to know the Bloody Rock story quite well because Queen Esther is the protagonist of Visions of Teaoga, my historical novel about Indian-settler conflict in the Eastern woodlands. As a boy growing up near Wilkes-Barre, I had heard of the Wyoming Valley Massacre but didn’t really know what it was about. I’d never of Queen Esther, either, so I knew nothing about her supposed role. None of this awesome history was taught to us in school, and it’s still skipped over. Visions of Teaoga is my attempt to fill that gap.

Queen Esther was an extraordinary, complicated person, and a natural to serve as my storyteller. I see her as a tragic figure on a Shakespearean scale. People still argue about her role in the Bloody Rock episode, and even about who she really was. I found six different versions of her origins and lineage and went with the one I found most credible, that she was full-blooded Shawnee.

But was she a killer? There are documented accounts of Esther being a peace woman who had good relations with white neighbors for much of her life. Some say it wouldn’t be like her to perpetrate a massacre of helpless captives, and that in any event she was too far away from the battlefield that day. But others who knew her swore she was the one who lifted the bloody maul. Indeed, it is possible that she did it. Perhaps she psychologically snapped from a lifetime of setbacks to her people. Maybe she was enacting the revenge required because of the death of one her sons earlier in the battle. (I work it out in a plausible way in my book’s climax.)

What we do know is that to the enraged Patriot public, Esther was seen as evil incarnate. They called her a demon, the “Butcher of Wyoming.” General Washington ordered a foray that burned down Queen’s Esther Village, the town she led on the upper Susquehanna, and followed that with the Sullivan Campaign that invaded the Iroquois heartland to destroy crops and villages. It’s said Esther went into seclusion and remained a wanted woman for the rest of her life.

Nationalist propaganda focused on the slaughter of the Patriot fighters but overlooked the fact that the outnumbered militiamen foolishly left their fort and marched into a trap after spurning an offer to surrender and be spared. It was blind to the fact that the warriors killed men who took up arms against them--but let all the women and children flee the bloodbath. And it said nothing about why the “savages” were so wrathful; many were carrying out a delayed vengeance for a controversial land grab that had dispossessed their families of the Wyoming Valley a generation earlier.

In the early years of our nation, the bloody episode grew legendary, its victims heroicized. The events inspired the name of the then-new Wyoming territory out west. In 1843, a hulking obelisk was built near the battle site to memorialize the dead militiamen.

Every July 4, a public ceremony is held at the obelisk to commemorate the battle. You can attend the one scheduled for this July 4 at 10 a.m.

And you can drive north a mile, to the little town of Wyoming, Pa., and visit the actual Bloody Rock. It’s covered by a metal grate to protect it from souvenir hunters. You’ll see a plaque that the DAR installed in 1895 that pins the deed squarely on Esther. Fortunately, it’s surmounted now by a state historical marker that corrects the record by noting that the killer was “traditionally but not certainly identified as ‘Queen Esther.’”

Check it out. This is the stuff of legend, and a history too rich to forget.

I grew up in the Wyoming Valley (Nicholson area) and only recently started delving into the amazing tales and history surrounding the personalities and events related to the Wyoming Massacre. Fascinating stories to be brought to life. Thank you.