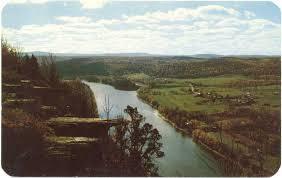 One of the most gorgeous spots in Pennsylvania is the Wyalusing Rocks overlook. Looming high above the upper Susquehanna River, it offers a breathtaking vista of the winding river and its broad alluvial plain. As a boy from that Northeastern Pennsylvania region, I remember going there with my parents and beholding the view in awe. Wouldn’t you know, in my historical novel Visions of Teaoga, my modern young protagonist and her dad pull over at Wyalusing to absorb the historical setting before them.

Go to Wyalusing today and, mixed among the roadside tourists, you may find Native Americans, there to pray and pay their respects. They know that this was far more than a lovely overlook. It was a strategically important sentry post, a site of tribal councils, and sacred ground. Fifteen years ago, the Eastern Delaware Nations coalition managed to buy 14 acres of the cliffs, and one of the group’s chiefs, John Taffe, tells me seekers of all ages go there to conduct traditional vision quests.

Wyalusing has been on my mind because I’ll be traveling to the nearby Wyalusing Public Library to give an author talk this Saturday at 1 p.m. I’ll tell folks how their area fits into the book—not only with my modern girl protagonist but more importantly with my historical protagonist. This was the real-life native matriarch known to white settlers as Queen Esther.

During the 1700s, Esther and her people roamed up and down the Susquehanna’s north branch, seeking safe ground during repeated conflicts with the Europeans. According to the historical record, Esther was a peacemaker for much of her life and an admirer of the Moravian Christian missionaries who established an Indian “prayer town” on the river flats south of the Wyalusing Rocks. Though she did not convert, three of her children did, changing their names and identities in the process.

Over time, the pacifist Moravians were rejected by many native and white leaders. In the early 1770s, under increasing pressure, the Moravians abandoned their Wyalusing mission, known as Friedenshutten, and headed west. Esther never saw her three children again. During the Revolutionary War several years later, native war parties allied with the British attacked patriot settlers across that region. As the settlers fled south, many headed downriver on rafts made of timber salvaged from the abandoned Friedenshutten buildings.

As readers of Visions of Teaoga learn, Esther was married to a war chief of the Munsee Delaware clan. The Munsees had been ousted from their heartland in the Pocono Mountains in the mid-1700s and forced west to the Susquehanna valley.
Today, the Munsees are one of the main constituencies of the reconstituted Eastern Delaware Nations. The EDN’s other tribes are the Nanticoke, the Lenni-Lenape, the Conoy, the Susquehannock, the Shawnee (Esther’s tribe), the Sicannasee, the Wiccomiko, the Mohican, the Umlatchgo, the Conestoga, and the Alleghany. To increase its knowledge base, Mr. Taffe said, the EDN has worked closely with Delaware tribal leaders from the Moraviantown reserve in Ontario.

The EDN formed thirty years and gained nonprofit status in 1993. However, according to its website, www.easterndelawarenations.org, it has never been recognized as a tribe by Pennsylvania or the federal government. “Although the government official stand is that 'no Indians stayed in Pennsylvania,' our ancestors did stay and we are still here!” the coalition declares. In recent years the EDN has conducted public outreach, with achievements including August “Native American Awareness Month” events, school presentations, a mural, and a popular powwow each June in Forksville, Pa. (which I hope to join this year!).

Mr. Taffe, who calls himself a EDN subchief, says the initial plan to build a cultural center right across the highway from the Wyalusing overlook fell through when money dried up in recent years. Instead, the group purchased a former grange building in nearby Wilmot, where meetings and events are held. One of those events, he said, is an occasional series of Munsee-dialect classes conducted by his daughter, Susan Taffe Reed, who teaches at Bowdoin College--and is the Eastern Delaware Nations’ current chief.

Let’s hope EDN stays strong and continues to spread the word about Pennsylvania’s native past and present.