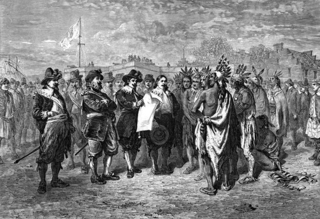 The online journal Slate provided a small-world moment for me the other day. It posted a compelling history article that combined the New Amsterdam Dutch (my very forebears), the Munsee Indians (major players in my historical novel), and even native condolence ceremonies (a powerful aspect of the book’s plot). Let me explain.

The article takes a close and fascinating look at the sale of Staten Island to Dutch and later English settlers in several transactions in the 1600s. Author Andrew Lipman, a Barnard College history professor, notes that the indigenous people who sold the island were known broadly as Munsee because of their common dialects. These are the people who over time were forced west into New Jersey, then Pennsylvania, and then many points beyond, and who became associated with the Lenape or Delaware nation. One of the main characters in my novel Visions of Teaoga is Eghohowin, a real-life Munsee war chief who traversed Pennsylvania in bitterness during the 1700s.

Lipman challenges the notion that Indians could not imagine selling land and were easily duped into it by Europeans. “Indians across the continent transformed the natural world to their liking, marked extensive territorial boundaries, and consecrated their lands with their buried dead,” he writes. “And many native leaders agreed with colonists that at least some tracts (especially those without sacred significance) could be bounded, transferred, or leased.”

But still--as Chief Eghohowin found--land was often relinquished to whites under pressure and the real prospect of violence. As Lipman states, “Although colonists seldom made explicit threats when orchestrating land exchanges, and the text of deeds typically championed peaceful coexistence, there remained the possibility of illegal incursions or bloodshed if the papers were not signed.”

The Munsees on Staten Island might have been ready to sell and move on, anyway, because the whites’ free-ranging livestock was trampling their cornfields. But the record shows that the natives still drove a hard bargain, pushing the English to greatly increase their offer of clothing, guns, lead, powder, hoes, and knives. The Indians also received more than 72,000 wampum beads in the sale.

Following their custom, the Munsees had several of their children sign as witnesses to the final sale. “Munsee people had long been dedicated to teaching their little ones about politics and history,” Lipman writes. “More than two decades earlier, in the midst of the horrific Dutch-Indian war known as Kieft’s War, sachems [chiefs] who left a failed peace negotiation made it clear that this moment would live on. While criticizing the New Netherland director Willem Kieft, some Munsees remarked that if Kieft had only given them enough wampum and other condolence gifts, the colonial massacres of their people might have been forgiven and ‘would never again be spoken of.’ But the director was so stingy that ‘the infant upon the small [cradle] board would remember’ the Dutch atrocities. The same principle seemed to be at work among the Staten Island Indians.”

The full article can be found at: http://www.slate.com/articles/news_and_politics/history/2015/04/staten_island_for_sale_the_munsee_indians_sold_staten_island_under_duress.2.html