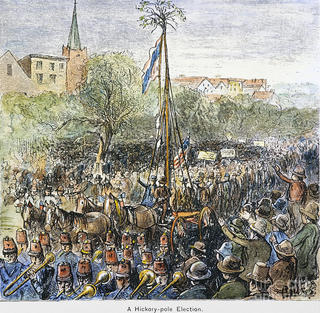 Even if you figure The Register was inflating the size of the turnouts and the level of enthusiasm, the events still must have been galvanizing. For instance, the June 6 “gathering of the yeomanry” in Greenfield drew many “in their four-horse teams, heavily freighted with the Democracy of their immediate neighborhoods. Others with two-horse teams; some in buggies, some on horseback, and hundreds came on foot…Flags and national music enlivened the occasion at intervals.” Resolutions were adopted that denounced both Lincoln’s war powers and abolitionist “fanaticism” (saying the abolitionists “may be hopelessly insane; still, they shall not be permitted to rule or ruin this great nation.”).

Similarly, several thousand in Harford cheered as the speaker blasted away. According to the Register, “the ‘Negro Equality’ doctrine, in connection with the Abolition policy of the Administration, received the largest share of his satire—the tremendous volleys of which frequently call out the most enthusiastic demonstration.”

Then came the one in Fleetville, just five miles north of Waverly, on July 4 (“More Than 6,000 Present!”). A hickory pole, symbol of Jacksonian Democracy, was erected, more fiery speeches were cheered, and “a committee of two hundred ladies presented the gentlemen who addressed them with a most beautiful bouquet.”

Also that day, the crowd affirmed an angry resolution written by Waverly lawyer Thomas Smith. This long manifesto denounced the federal government’s “negro fanaticism” and called for “a speedy deliverance from Abraham Lincoln’s bloody Abolition rule.” It declared the president guilty of treason—and said that “for his numerous wanton violations of the Constitution of the United States he ought to be impeached.”

Contrary to other modern accounts I’ve read, the so-called “Crackerbarrel Congress” manifesto was not merely the product of a handful of cranky men who met in the backroom of a Fleetville store. They were speaking for thousands of people in that region, dissidents who repudiated “King Abraham”--and also couldn’t stand black people and their white allies in places like Waverly.