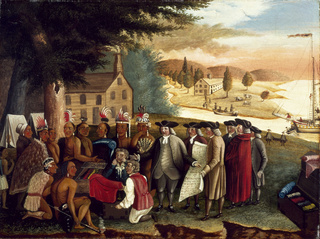 "Penn's Treaty With the Indians," by Edward Hicks.

The Encyclopedia of Greater Philadelphia has been adding some fine entries lately, particularly regarding the region’s Native American history. The latest installment takes a fascinating look at one of the most ragtag yet important sets of characters roaming the early borderlands – the intermediaries. These were ad-hoc diplomats and interpreters pressed into duty to facilitate talks between the Indian tribes and the Colonial authorities.

As the article’s author, Calvin College history professor Stephen T. Staggs, writes, “They ranged from a French-Shawnee fur trader to a German pioneer, from an acculturated Delaware to a Polish-Prussian missionary, and from an Oneida living in a Shawnee village to a Delaware captive.”

I was pleased to see the online encyclopedia focus on these go-betweens because they’re a factor in my historical novel about the Eastern woodlands, Visions of Teaoga. An interpreter is a constant presence at the 1790 Seneca-U.S. peace council that is the center of my action. With peace on the frontier at stake, President Washington’s envoy needed his words--his pledges--to be relayed carefully at the tense gathering. The historical record indicates that they were.

Further, the Shawnee protagonist of Visions of Teaoga, the matriarch known as Queen Esther, might herself have belonged to a family of intermediaries. These were the renowned Montours, namesake of Montoursville, Pa., and Montour County. For several generations during the 18th century, Madame Montour, French Margaret Montour, Catherine Montour and Andrew Montour shuttled through the province as go-betweens. Was Esther truly a Montour? Some have insisted she was, but I find the evidence thin and favor the alternate view that she was a full-blooded Shawnee.

In any event, history shows that the frontier intermediaries were not always honest brokers. “For many years,” Staggs writes, “they helped maintain a tenuous peace, but, with questionable methods such as fake maps and vague treaty statements, some intermediaries collaborated with the government of Pennsylvania and land speculators, thus triggering the Indians’ frustrations that played a role in the outbreak of violence and the Seven Years’ War.”

Esther and her people were victims of the notorious 1737 land fraud known as the Walking Purchase. As recounted in Visions of Teaoga, they were forced out of the Poconos to the intertribal “refugee town” of Shamokin (present-day Sunbury, Pa.). Shamokin’s Iroquois overlord, Shikellamy, and the colonial intermediary Conrad Weiser “helped orchestrate a series of major treaties between the leaders of Iroquoia and Pennsylvania in 1732, 1736, and 1742, which promoted trade and asserted control over the peoples living between Onondaga and Philadelphia,” Staggs explains. “The population increased steadily between the two capitals, however, leading to more frequent disputes between native and colonial neighbors.”

It was an era of connivance, conflict and reprisals that played out all the way through the Revolutionary War and led to the final dispossession of Native Americans from the new state of Pennsylvania.

Professor Staggs’ entry can be read in full at http://philadelphiaencyclopedia.org/archive/native-and-colonial-go-betweens/.