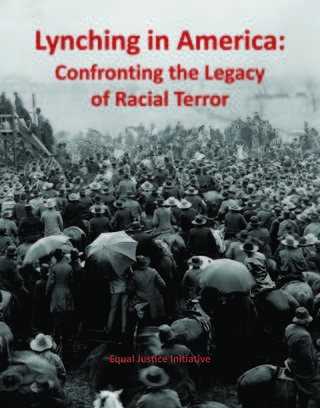 This month, an intrepid Alabama-based rights group called the Equal Justice Initiative issued a monumental report on lynching that’s designed to grab us all by the lapels. It certainly has lit up social media. In five years of field research, the group amassed an inventory of 3,959 victims of “racial terror lynchings” in 12 Southern states from 1877 to 1950. That’s at least 700 more lynchings in these states than were previously listed.

An essential take-away from the research is that those hangings and burnings were hardly rogue occurrences.

“Lynchings were violent and public events that traumatized black people throughout the country and were largely tolerated by state and federal officials,” the Equal Justice Initiative states. “This was not ‘frontier justice’ carried out by a few marginalized vigilantes or extremists. Instead, many African Americans who were never accused of any crime were tortured and murdered in front of picnicking spectators (including elected officials and prominent citizens) for bumping into a white person, or wearing their military uniforms after World War I, or not using the appropriate title when addressing a white person. People who participated in lynchings were celebrated and acted with impunity. Not a single white person was convicted of murder for lynching a black person in America during this period.”

If you get the New York Times, you might have read the Feb. 10 article about the report. It included a map locating all the lynchings, and noted that the Initiative’s plan to erect public markers -- in a region replete with laudatory Confederate monuments -- “will involve significant fund-raising, negotiations with distrustful landowners and, almost undoubtedly, intense controversy.”

Reading the Times article made me decide to blog about it now, and pivot away from the focus of previous blogs. My 15 earlier posts dealt with American Indian topics, being an outgrowth of my historical novel Visions of Teaoga. Lynching struck a particular nerve because I’ve launched another writing project, on an African American topic this time. It involves my little hometown in Northeastern Pennsylvania, which harbored a settlement of ex-slaves during the Underground Railroad years. A dozen of the town’s black men volunteered for the Union Army and fought in the Civil War. I’ve been researching the men’s unsung lives, including their origins in bondage in the racist South.

The Times article on the lynching report led me to the Equal Justice Initiative’s website and directly to its full report and county-by-county tally of the crimes. Consider scanning the tally youself, at eji.org.

It might reveal that even if you’re not from the South, you’re probably only one step removed from the shadow of lynching. For instance, my dad’s parents lived for years in Georgia, in a county that tallied five lynchings. Three lynchings occurred in the South Carolina county where my nephew lives, another three in the North Carolina county where a cousin lives. Another cousin raised her family in an Arkansas county that tallied one lynching. And who hasn’t vacationed in Miami-Dade County, which experienced six lynchings, or New Orleans, which tallied 13?

Still, some might argue, our modern society has turned the page on lynchings so why dwell on it so much? Here’s how Bryan Stevenson, who heads the Equal Justice Initiative, answers that.

“Lynching profoundly impacted race relations in this country and shaped the contemporary geographic, political, social, and economic conditions of African Americans. Most importantly, lynching reinforced a narrative of racial difference and a legacy of racial inequality that is readily apparent in our criminal justice system today. Mass incarceration, racially biased capital punishment, excessive sentencing, disproportionate sentencing of racial minorities, and police abuse of people of color reveal problems in American society that were shaped by the terror era.”

Indeed, Stevenson argues, many African Americans who joined the Great Migration from the South should be considered refugees fleeing terrorism and not merely seeking work in Northern factories.

“We cannot heal the deep wounds inflicted during the era of racial terrorism until we tell the truth about it,” he says. “The geographic, political, economic, and social consequences of decades of terror lynchings can still be seen in many communities today and the damage created by lynching needs to be confronted and discussed. Only then can we meaningfully address the contemporary problems that are lynching’s legacy.”

In a remarkable postscript, FBI director James B. Comey made a similar point in a Feb. 12 speech about police and prosecutors’ mixed record on racial matters.
“All of us in law enforcement must be honest enough to acknowledge that much of our history is not pretty,” Comey said. “At many points in American history, law enforcement enforced the status quo, a status quo that was often brutally unfair to disfavored groups.”
Be the first to comment