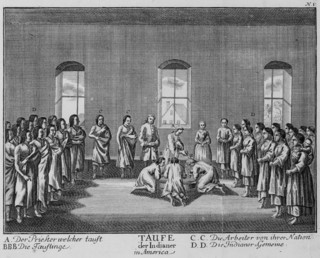 An engraving of Moravian Indian converts being baptized in virginal white robes.
During the colonial era, the Christian group that historians say had the greatest success evangelizing to Native Americans was not the Baptists, nor the Presbyterians, nor the Quakers. It was a group that many people outside Pennsylvania are clueless about – the Moravians.

This German-speaking pacifist sect found refuge from persecution in William Penn’s new colony, establishing the lovely little city of Bethlehem, Pa., as its new base. It turns out I’ll be making an author appearance at the Moravian Book Shop in Bethlehem this Saturday afternoon, March 21, and will happily highlight the Moravian history that runs through my book Visions of Teaoga.

And run through it, it certainly does.

The book’s real-life protagonist, the 18th-century Shawnee matriarch known as Queen Esther, was attracted to the Moravian missionaries and made numerous visits to their “prayer towns” on the Susquehanna River. The record shows that three of her children even converted to Christianity during their time at the Moravian mission known as Friedenshutten.

The Moravians’ overall aim was to create a joint community they called Civitas Indiana-Germana, which translates as the “Indian-German Commonwealth.” To do that, their missionaries lived among the Indians as equals, learned their languages, and didn’t push mass conversions. It sounds normal today, but it was radical for the time, and it made them the most successful Indian missionaries in the colonies.

Even Esther’s war-chief husband was intrigued. During his visits to Friedenshutten (present-day Wyalusing, Pa.), he had observed the Moravian blacksmiths repairing Indian muskets, straightening their implements, and making new tools in exchange for furs. He saw how the Moravian discipline – industriousness in the field, mutual support, no liquor – sat well with the Indian converts. So he invited the Moravians into his domain farther upriver, where a satellite mission was established in 1769. In little time, as I write in my book, “the congregants built a chapel with a shingled roof. They planted orchards, laid fences around the fields, set aside Sunday as a day of rest, taught hymns, and gathered the native children for lessons.” The missionaries also introduced the newcomers to wood-plank houses and chimneys – which some enjoyed and others shunned as “an insult to the ancestors.”

Drawing from accounts of Esther’s beliefs, I have her saying this to a circle of Indian women: “For all my time among them, the Moravians held close to their path of peace. I saw how they would soothe anger among our native groups. They would try to feed and comfort captives who passed through. A few times I saw them protect black-skinned slaves who had escaped from their holders. I was weary of conflict, so their manner warmed me deeply.”

Nevertheless, over time Esther’s husband and other war chiefs and sachems grew to distrust the Moravians. They might praise the converts’ hard work and sharing, but they were angered by the rules against taking up weapons, against face-painting, against scalp locks. According to the shaman Wagomen ’s recorded words, “the converts are useless in war and should be expelled from our tribes. If the Preserver wanted us to live like them, we would have been born among them.”

Many white settlers also disliked the Moravian towns because they were pacifist and would not trade with them nor buy their rum. The mission towns became more and more isolated and under increasing land pressure as swarms of settlers moved ever closer up the Susquehanna.

Soon Esther’s native community relocated farther north – and the Moravians and their converts uprooted themselves and headed overland to Ohio country. What awaited them was more wrath, and the notorious 1782 Gnaddenhutten massacre at the hands of white militiamen.
Be the first to comment