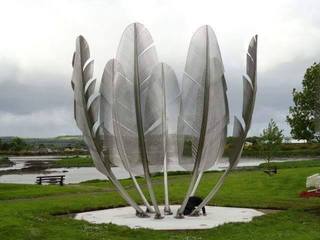 This monument in Middleton, County Cork, Ireland, honors the Choctaw.

A major antagonist in my book Visions of Teaoga isn’t a person but a stone monument. Its plaque commemorates a Revolutionary War assault into the Iroquois Indian heartland--a march it says “destroyed savagery” and opened the region to “civilization.” Dedicated in 1902 by the Daughters of the American Revolution, the monument perfectly captures our country’s then-imbedded mindset that native peoples were mere savages with no redeeming values.

So I loved learning the other day about one tribe’s beautiful and little-known good works on behalf of white people a half-century earlier. What a redeeming story it is.

The Choctaw Indians were one of the first tribes to be uprooted and forced west on the horrific Trails of Tears in the early 1830s. Untold numbers died from hunger and exposure on the long, cold march from their Mississippi homeland to faraway Oklahoma, where they faced new hardships. Sixteen years later, the Choctaws learned of the Irish potato famine and of how the British overlords would not provide any other food than the blighted potato to the thousands of starving Irish. “Only sixteen years had passed since the Choctaws themselves had faced hunger and death on the first Trail of Tears, and a great empathy was felt when they heard such a similar story coming from across the ocean,” states the Choctaw Nation website. “Individuals made donations totaling $170 in 1847 to send to assist the Irish people. These noble Choctaw people, who had such meager resources, gave all they could on behalf of others in greater need.”

This story of generosity may be unknown here, but the Irish never forgot. A friendship monument has been erected in County Cork. Irish and Choctaw delegations have made exchange visits. The Lord Mayor’s mansion in Dublin installed a plaque reading: “Their humanity calls us to remember the millions of human beings throughout our world today who die of hunger and hunger-related illness in a world of plenty.”

The Choctaw article was sent by a friend who’d been with me on a tour of Ireland in July. We visited lovely southwestern Ireland, which is still under-populated due to the famine deaths and the resulting mass emigration to the U.S. We visited a cemetery with a potter’s field bearing ten thousand famine victims. It was explained to us why, because food was available but just not provided under British policy, the Irish call the famine The Great Hunger. The Choctaws, having been persecuted by “civilized” rulers themselves, wouldn’t have needed any explanation.

You can learn about the tribe’s continuing good works here: http://www.choctawnation.com/history/choctaw-nation-history/choctaws-helped-starving-irish-in-1847-this-act-shaped-tribal-culture/

You can also join the "Choctaw Irish Famine" Facebook page.